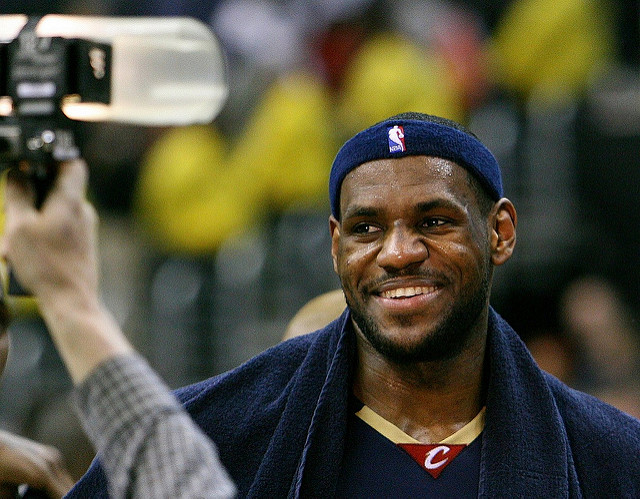 Uncharacteristic mistakes by Lebron James led to a Game 1 blowout in the 2017 NBA Finals. (photo via Flickr/Keith Allison)

Two of the best parts about the end of May and beginning of June are the Stanley Cup Finals and NBA Finals. The two events are a perfect way to wait until MLB reaches the All-Star Game and NFL training camps open.

At the present moment, the Stanley Cup Finals sit at 2-0 in favor of the Pittsburgh Penguins over the Nashville Predators, and last night, June 1, the Golden State Warriors routed the Cleveland Cavaliers in game one of the NBA Finals.

There is still plenty of time for both finals to turn around, and become classic and memorable contests, but it doesn’t look that way right now.

Game one of the Stanley Cup Finals showed what the whole series could look like. Pittsburgh jumped out to a 3-0 lead after the first period. Nashville battled back with a goal in the second period and two goals by the middle of the third period to tie at 3-3.

The Penguins then scored two goals late in the final period for the win. It was a thrilling game, with the Predators getting off the floor after the Penguins smacked them around in the opening period.

Game two looked like it had the makings of a classic, as well. Both teams scored a goal in the first period and stayed tied at 1-1 after the second period. Then came another Penguins onslaught. Pittsburgh scored 10 seconds into the third period to take the lead and then added two more goals shortly after to turn a tie game into a 4-1 massacre.

The win gives the Penguins a 2-0 lead in the finals as the series shifts from Pittsburgh to Nashville. The Predators will be in a must-win situation at home for game three on Saturday, June 3. If Pittsburgh wins, it would seem like the Stanley Cup Finals are over, given how hard it is for teams to come back from that deep of a hole.

Over in the NBA, it looked like the trilogy of finals between the Warriors and Cavaliers was going to live up to last season’s series, which was a seven-game thriller. In the first game, Golden State led by five points after the first quarter, and both teams were running up and down the court.

The second quarter saw the Warriors jump out to a bigger lead, though the Cavaliers battled back. Golden State led by eight at the half, but there were signs that the team could take the game over completely.

Turnovers plagued Cleveland over large stretches of the game. The Cavaliers committed 20 turnovers in the game, with star LeBron James uncharacteristically committing eight turnovers himself.

Golden State wasted no time in the early third quarter taking over the game and building a big lead. Cleveland couldn’t answer with its poor shooting and even poorer defense, as the game became a dunk fest and the Warriors had tons of easy pull-up jumpers.

By the middle of the fourth quarter, the game was no longer in doubt. Golden State rolled to an easy 113-91 win as they rid themselves of a few demons from last year’s finals.

Things could turn around in game two on Sunday, June 4, if the Cavaliers play better defense, get more rebounds and limit their turnovers. In game one, Golden State tied a finals record with just four turnovers in total and moved to 13-0 in these playoffs.

The last time that the Stanley Cup Finals and NBA Finals were both sweeps was in 1995. That year, the New Jersey Devils won 4-0 over the Detroit Red Wings and began a streak of four consecutive years of sweeps.

In the NBA, the Houston Rockets swept the Orlando Magic for a second-straight championship. The next year, Michael Jordan led the Chicago Bulls to their first title in what would be the beginning of a second championship three-peat.

This weekend will be important for both finals if the series are going to become nothing more than run away victories for one team. Right now, both finals feel like a bummer.