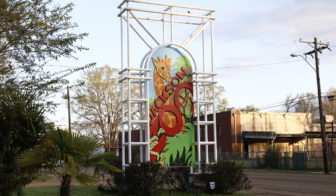 On Friday, Aug. 4, the Jackson Zoo announced that its almost-45-year-old rhino, Ronnie, passed away on Wednesday, Aug. 2.

“He was a very special animal to work with, and keepers found him very easy to care for,” Animal Care Supervisor Willie Bennett said in a press release. “The past few years had seen a major increase in his needs as he got into his 40s (the median age of a white or wide-lipped rhino is 34 years). Careful watch over his diet and exercise was required, as well as daily medication for arthritic joints and skin issues caused by his more limited mobility. Even as his health was declining, Ronnie’s spirit stayed strong. He never gave up.”

Ronnie was born in South Africa in 1973. In March 2011, he arrived at the Jackson Zoo from the White Oak Conservation Center in Yulee, Fla. He was the largest living animal at the zoo until fellow rhino Big Mike came in 2013.

In the release, zoo keepers said that Ronnie was “a gentle giant who was not shy about his love of grain or getting a good scratch behind the ear.” They said that he was also a huge fan of sweet potatoes and loved wallowing in the mud in his exhibit.

“It is with great sorrow that we share the loss of one of our rhinos, Ronnie,” Executive Director Beth Poff said. “He has been a part of the zoo for over six years, and was a big part of our special behind-the-scenes experiences for donors. His gentle impressiveness will be missed.”

Ronnie was a southern white rhino, which were on the brink of extinction in the early 1900s with only about 50 animals in the world. The current number is about 21,000. Though poaching was banned around the world in 1977, a resurgence in it in 2012 has kept the five species of rhinos on the International Union for Conservation of Nature’s critically endangered list. The Jackson Zoological Society works to support the rhinos’ conservation. For more information, visit jacksonzoo.org.