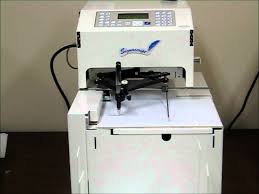 Cowboys quarterback Dak Prescott is accused of using an autopen similar to this one to sign cards.

not in comparison to these days. There were Mississippi State University and Dallas Cowboys fans may have been interested in the fourth-round draft pick, but the rest of the nation wasn’t Dak crazy yet.

During the early preseason games, Prescott shined brightly. Then, Cowboys quarterback Tony Romo ended up hurting his back in a preseason game, and second-string quarterback Kellen Moore broke his leg in practice, so Prescott became the starter.

Over the course of his rookie season, Prescott led the Cowboys to several impressive wins, and the team finished 13-3 to end the regular season. As the rookie made outstanding play after outstanding play, people around the nation began to take note.

Now, everyone would love to have Prescott’s autograph as he gets ready to start his second season in the league. If he can repeat the success of his rookie year, that autograph will rise in value for collectors.

Unfortunately, there may be some trouble on the autograph front according to a report from ESPN writer Darren Rovell. Beckett Grading Services, a service that evaluates and grades trading cards, is refusing to grade Prescott’s signature on a recent card set, Panini’s 2016 Prizm.

Beckett looked at five cards from collectors who received the autograph and determined that the signatures may have been done with an autopen. Politicians have been using autopen machines to sign large quantities of documents since the 1950s.

This isn’t the first time that autographed Panini cards have hit a snag. In fact, in May of this year, the company announced that Atlanta Falcons first-round pick Takkarist McKinley hadn’t actually signed cards that supposedly featured his signature. The company promised to send authentic signed cards to customers who returned their signed McKinley cards.

Panini requires athletes to sign an affidavit stating that their signatures on cards and memorabilia are genuine. It’s possible that Prescott may have never seen the cards, however, since companies normally send memorabilia to a marketing agent first.

Rovell’s article states that he was unable to reach Panini, Prescott, his agent Jeff Guerreiro and marketing agent Peter Miller for comment.

Prescott isn’t the only quarterback from a school in our state to hit memorabilia trouble. New York Giants quarterback Eli Manning, who played for the University of Mississippi, is in the middle of memorabilia scandal himself. He is currently facing allegations that he falsely sold helmets as game-used to increase their value.