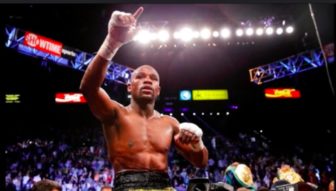 Floyd Mayweather owes taxes from 2015. His Aug 26 fight could be use to pay the IRS.

over the course of his career. He has been a massive success in the ring with a 49-0 career record, and he has made a fortune from his boxing exploits—around $700 million.

The boxer isn’t shy about showing off his winnings from bets on other sports, either. Mayweather has taken to social media several times to post betting slips and stacks of cash that he has made from gambling. He has posted the rare losing ticket from time to time, as well.

But there is one person Mayweather doesn’t have money for, an

d that is Uncle Sam. Law360, a news source focused on legal matters, reports that the boxer still owes an undisclosed amount to the International Revenue Service for his 2015 taxes.

Mayweather filed a petition in U.S. Tax Court on July 5 asking for a reprieve on his 2015 tax bill until after his Aug. 26 fight with mixed-martial artist Conor McGregor. The IRS, on the other hand, has said that the boxer has other ways of paying off his debt, including selling property, using money from other accounts or taking out a loan.

It was in 2015 that Mayweather had his mega fight against Manny Pacquiao. The boxer earned around $220 million for the fight and even showed his check for $100 million on social media, which was his guaranteed take for the fight. The rest came from pay-per-view earnings and other sources from the fight.

In his petition, Mayweather has also asked for the court to waive the late penalty. According to ESPN, there is a 0.5-percent late fee for each month, and Mayweather is up to a 7.5 percent charge for being 15 months late on his taxes.

There are estimates that Mayweather will make as much as $220 million or more in his fight with McGregor, as he did with his fight with Pacquiao. That means the boxer will owe his 2015 tax bill and still have to pay taxes next year on his latest mega fight.

Mayweather is learning what Biggie Smalls told us in 1997: “Mo Money Mo Problems.”