Note: This post was written before the lawsuit filed by former UM head coach Houston Nutt. 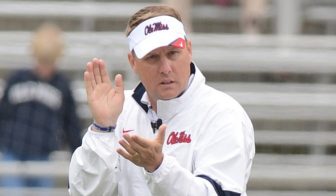 Around the web, many writers believe Freeze is on the hot seat.

Days on Thursday, July 13, and someone is surely going to ask him about his program’s trouble with the NCAA at some point.

It seems that the Rebels have been under investigation for breaking rules forever. At some point, the program will have a date with the Committee on Infractions, and it will have to face the music.

The University has stood solidly behind Freeze and is fighting the NCAA’s finding that the program has a lack of institutional control. If the NCAA finds Freeze guilty, it is highly likely that he will be suspended for some games during the 2018 season.

One curious thing around the Internet is the number of articles and websites that have Freeze on “the hot seat.”

Nearly every coach not named Nick Saban could be listed as on “the hot seat” because of the high expectations of nearly every fan base.

But why is Freeze constantly ranked near the top of offseason articles detailing coaches on the hot seat? Is it the media’s perception of what should be going on in Oxford, Miss., or is there really a chance Freeze could be in trouble if the NCAA drops the hammer on the program?

The Rebels’ fan base seems mostly behind Freeze. Few coaches, if any, enjoy 100 percent of fans backing them, and everyone in the university administration but Freeze seems to be on solid footing.

Recruiting took a hit this year, but the program has been under the NCAA cloud for a while. If the Rebels continue to struggle with recruiting, it could spell the end of Freeze. It is hard for any coach to overcome poor recruiting.

If poor recruiting leads to losses on the field, Freeze could be in trouble. It depends on whether the fan base will give the coach a chance to bounce back from any NCAA sanctions that the COI levels.

Freeze might have the ability to survive anything the NCAA throws at him. It depends on how far the program falls if the COI doesn’t accept the Rebels’ self-imposed sanctions. If the committee lays the hammer down on the program, who knows how long it will take for the Rebels to bounce back.

Right now it seems odd that media would consider Freeze on the hot seat. He has solid fan support, and the university seems ready to go to the mat for him against the NCAA.

In college football, a coach’s job security can change in a heartbeat and might be even quicker in the SEC. No coach is ever truly safe, but it seems like Freeze is too high on most preseason lists for coaches on the hot seat.

This year it would be a major surprise if Freeze doesn’t have job security. Next year it all could change depending how this season plays out and what the NCAA does to the program.