The college-basketball season is still months away, but that doesn’t mean important news 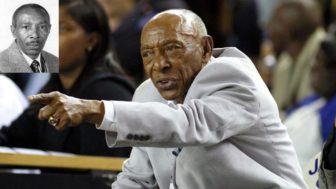 The SWAC honors Alcorn coaching great by naming tournament trophy after him.

Whitney, who died in 2015, wasn’t just one of the greatest coaches in Alcorn State history but one of the greatest in the history of the SWAC and our state. During his two stints as the Braves’ head coach, he posted a 508-292 overall record and a 259-115 conference record. He has the most coaching wins in school history, with 318 more wins, than second-place coach Dwight Fisher, who had 190 wins.

He coached at ASU from 1969 to 1989, but he returned to the Braves in 1996, staying with the team until 2003. During his time with the program, he led his teams to 12 SWAC Championships and was the SWAC Coach of Year nine times.

The Lexington, Ky., native struggled in his first season with the Braves, going 16-9 overall. In his second season, though, he led ASU to a 24-5 overall record and his first SWAC championship.

There were plenty of historic moments in the coach’s legendary career. In the 1978-1979 season, he led his team to a perfect 28-0 regular-season record and defeated Mississippi State University 80-78 in the NIT.

During the 1980 NCAA Tournament, Whitney led the Braves to a 70-62 win over the University of South Alabama. It was the first time that a historically black university won an NCAA Tournament game.

He reached his final NCAA Tournament in 2002 after posting a 21-10 overall record. His last tournament appearance ended with a loss to Siena College in a play-in game.

Under his coaching, Larry Smith won conference Player of the Year twice and Michael Phelps took home the award once. His team was lead by six players who won the SWAC Tournament MVP award in Smith (twice), Aaron Brandon (twice), Albert Irving and Marcus Fleming.