ESPN will make The Ocho real on Wednesday, Aug. 8, when ESPNU becomes ESPN8 The Ocho. 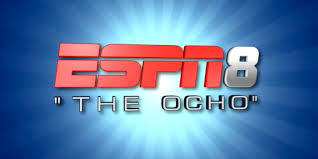 As Jason Bateman’s character, Pepper Brooks, would say to Gary Cole’s character, Cotton McKnight, “That is a bold strategy, Cotton. Let’s see if it pays off for ‘em.”

The fictional ESPN channel was the broadcast station for the movie, “Dodgeball: A True Underdog Story.” In the film, The Ocho shows the lovable Average Joes against Globo Gym in a Las Vegas dodgeball tournament.

Here is a rundown of the events on The Ocho:

An ESPN press release states that Cotton McKnight or Pepper Brooks will not be on hand to call any of the action. In my opinion, the Worldwide Leader should shell out whatever it took to get Cole and Bateman to make an appearance on the network.

But even without bringing in Cole or Bateman, it is a great idea from ESPN. So set your DVR and enjoy an entire day of “The Ocho.”