Six more Mississippi sports legends will be immortalized in the Mississippi Sports Hall of Fame and Museum on Aug. 5. 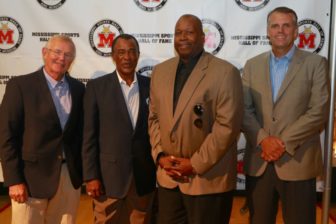 Cleveland is one of best sportswriters to come from the state. There are few Mississippians of a certain age that didn’t grow up reading his sports columns. His writing draws you in and makes you feel like an old friend was telling you a story. He has returned to full-time writing for Mississippi Today after spending time working for the Hall of Fame.

Braddy Sr. is the greatest baseball coach to take the helm at Jackson State and has the most wins in Southwestern Athletic Conference history. His leadership helped JSU go from a NAIA program to a Division I program. Braddy Sr. won 12 SWAC titles and made four NCAA Tournament appearances. He was inducted into the National College Baseball Hall of Fame in July 2016.

Conner was a standout player at Harrison Central High School and led her team to a 155-9 record before moving on to the University of Mississippi. She was named All-SEC all four years of her college career and led the program to four straight NCAA Tournament appearances. Those Rebels teams posted a 106-20 record. After Conner died in 1994 at the age of 30, the university created the Eugenia Conner Memorial Award, which goes to one junior or senior female athlete who has shown exemplary character and leadership skills each year.

Back in 1981, there might not have been a Mississippi high-school football player more sought after than Philadelphia High School running back Marcus Dupree. He picked the University of Oklahoma to begin his college career, but after just one season with the Sooners, he left for the University of Southern Mississippi. Ultimately, he left USM after three months, but rules prevented him from entering the NFL. Instead, he went on to play for the United States Football League.

While he did make a few short appearances in the NFL with the Los Angeles Rams from 1990 to 1992, injuries robbed Dupree of what might have been a special career. Dupree was the subject of Mississippi great Willie Morris’s book “The Courting of Marcus Dupree” and an ESPN 30 for 30 documentary, “The Best That Never Was.”

Frazier was a star at Stephen D. Lee High School in football, basketball and baseball. He went on to become a star for Alcorn State in football and then signed with the Chicago Bears as an undrafted free agent before an injury cut his career short. He has gone on to become a successful coach in the NFL, even serving on the coaching staff for the Indianapolis Colts team that won Super Bowl XLI.

Powell led West Lauderdale to a high-school baseball state championship as he played in the field and at pitcher. He went on to play at Mississippi State where he was both a starting and relief pitcher for the Bulldogs. He became the fourth MSU player to be drafted in the first-round, when the the Baltimore Orioles picked him up in 1993. He pitched a game-seven victory for the Florida Marlins in the 1997 World Series. After 11 seasons in MLB, he retired and has since won a state championship as the head baseball coach of Jackson Academy.