Being locked away, scribbling on walls and imaging every single scenario in my head for teams to finish their season makes me a little crazy. I start to have wild ideas, and sometimes those ideas stick, and I start to think that I just might be onto something. 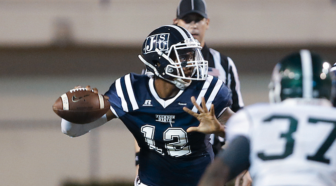 JSU looks to take the East back from ASU this season.

More than likely it is too much coffee and not enough sleep, but don’t discount me yet. Then again, look back at previous crazy predictions and see just how wrong I normally am.

1. MSU will finish third or better in the SEC West

Neither the Wildcats nor Bulldogs of Georgia have been winning division titles by the boatload. Georgia will be good and tough to beat in Athens, but they are beatable, and most years, and MSU takes care of Kentucky.

Unless Auburn University finds an offense, they aren’t contending for the West. Texas A&M University normally goes into its seasonal downward spiral right about the time the Bulldogs from Starkville show up on the schedule.

Louisiana State University has Ed Orgeron as head coach, and I haven’t forgotten the 2007 Egg Bowl. The University of Mississippi still wishes it had a head coach or at least one without a cell phone.

There is no telling what you are going to get out of the University of Arkansas from week to week. Then there is the University of Alabama, and well, it is pretty good most seasons. Alright, the Crimson Tide will beat MSU no matter where they play.

But the schedule is up for grabs. MSU played some close games last season. If the team has better defense and quarterback play, the Bulldogs could be in the hunt for the SEC West come November.

2. Alcorn State v. Jackson State will be for the SWAC East Title

The Tigers are now more than a full year into the Tony Hughes era and have had time to see his vision for the program. JSU should be better on offense and defense and know what the head coach expects from each player.

In the final game of the year, ASU and JSU will enter the game with winning records, and the winner will go on to play in the final SWAC Championship Game. It will be an epic game with everything on the line for both teams.

I still think Alcorn wins the game, but it will be really close with a late score in the fourth quarter sealing the deal for the Braves.

Much like JSU, Southern Miss is now a full year into the Jay Hopson Era. In his second year with Alcorn State, Hopson led the team to a 9-2 record and second place in the east division.

In his second year at USM, he should be able to repeat that feat. The only real obstacle in the way for the Golden Eagles will be Louisiana Tech.

USM should be able to handle the rest of the division. Really, there isn’t much to be afraid of in the C-USA West.

That leaves the Bulldogs of Louisiana Tech. USM has beaten the team two years in a row.

Hopson like Hughes will have a big season in 2017.

4. This season will have two or more coaching changes

After last season, all of the college and university stood firm with the head coaches they had in place. There will be a new head coach next season at the University of Mississippi after Hugh Freeze got fired. Does anyone else wonder if Freeze was trying to slide into Mia Khalifa’s DMs like former Rebels quarterback Chad Kelly?

If Freeze hadn’t been fired just weeks before the start of the season, every team would have brought back their coach from 2016. But don’t expect every coach from 2017 to be back when the 2018 season begins.

It feels like this year, a number of coaches could be shown a pink slip at schools at the Division II and Division III level. Mississippi Valley State could also decided to move on from Rick Comegy if things don’t improve.

Dan Mullen at MSU, Jay Hopson at USM, Tony Hughes at JSU and Fred McNair at ASU all seem safe right now. I would have said six months ago that Freeze was safe, but you never know what lurks in the cellphones of head coaches.

5. NCAA will add more sanctions to the Rebels

The powers that be in Oxford have been defiant toward the NCAA the whole way. Those same powers put all their eggs in the Hugh Freeze basket, which came back to bite them in the butt.

Expect the NCAA to make an example out of the Rebels when they meet with the Committee on Infractions late this summer or early fall. That means more scholarships losses and at least another year of bowl ban.

Freeze’s firing should give the NCAA all the ammo it needs to show that everything wasn’t on the up-and-up where the former head coach was concerned. If he had a pattern of behavior that wasn’t acceptable to be the head coach for the Rebels, he might not have been as NCAA-compliant as the university wants everyone to think.

When the hammer drops on the program, it will take the next coach a few years to rebuild from this disaster. Freeze’s coaching career might be over after the NCAA hits him with a show-cause penalty of five years or more.