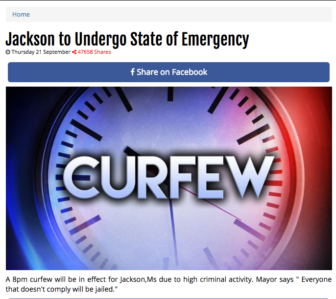 This is fake news. Don’t spread it.

The City of Jackson today sent out an alert warning about a false “social media article” that was making the rounds and apparently alarmed the mayor’s office.

When asked, city spokeswoman Kai Williams then provided the link to the fake-news alert on the react365.com site. It warned: “A 8pm curfew will be in effect for Jackson,Ms due to high criminal activity. Mayor says ‘Everyone that doesn’t comply will be jailed.'” (sic)

The site’s homepage urges to “prank your friends now!” by apparently spreading fake news alerts. It includes a couple of warnings: “Bully is forbidden” and “The authors of posts of bullying or that advocate acts of terrorism or violate public order are subject to prosecution.”

But outright lying seems to be A-OK because, you know, it’s a “prank.”

Our advice? Just say no to all of these fake news sites.

And by the way, don’t believe the lie about a mass grave of black men supposedly found on a KKK leader’s estate in Jackson, either. The “Jackson Telegraph” is a fake news site. Do. Not. Share. It.