In cased you missed it, author Joyce Carol Oates retweeted a photo of a banner at Mississippi State University that featured Mississippi author William Faulkner and said, “So funny! If Mississippians read, Faulkner would be banned.”

So funny! If Mississippians read, Faulkner would be banned. https://t.co/vK7EEBxmOX

If you’ve lived here long enough or know anything about southern literary history, you know that Mississippians read, and some of us even write! Of course, her tweet created a firestorm on Twitter with more than 1,200 replies. Here are some of the highlights.

1. I'm a Mississippian.
2. I'm a writer.
3. That's my university library that I have used since I was 9 years old to borrow books…

2 years ago she got mad at Spielberg for hunting after seeing a picture from the Jurassic Park set. https://t.co/cVrtdDHtRm

Perhaps you are unaware that a Mississippian is a finalist for this year's National Book Award–@jesmimi .

Anyone bless her heart yet?

Some of my favorite authors: Eudora Welty, Donna Tartt, Willie Morris, Walker Percy, Shelby Foote…oh, wait! They're all from Mississippi.

Surely the irony of suggesting Mississippians don’t read while discussing a Mississippian Nobel laureate isn’t lost on you.

Hmmmm. Sounds like you don't know what you're talking about.

Wow. I spend my days trying to combat this kind of ignorance and hurtful commentary from students–didn't expect to see it coming from you.

As a WNY'er who lives in MS now, I invite you to @MSLibraryComm and @MSLibraryAssoc #mslib2017 to meet the librarians keeping reading alive.

I’m a Mississippian. I read. I write, too. Check the NYT list for the past 32 weeks. Please don’t make assumptions about us all. Thank you. https://t.co/sYAOOCZxXy

Jesmyn Ward had one of the best responses to Oates’ tweet:

I neglect twitter for a day and come back to find my entire state maligned and accused of illiteracy.

And lot of people replied with this photo from the Mississippi, Believe It campaign: 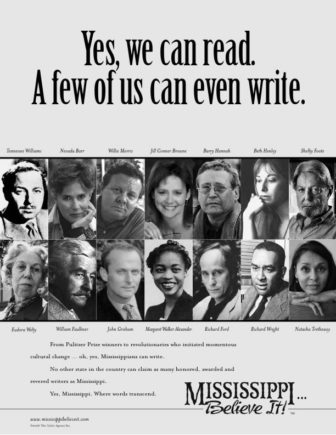