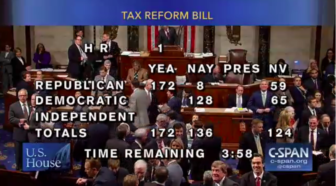 “We are about to change some really big things,” House Speaker Paul Ryan said this afternoon on the House floor. The U.S. House of Representatives is close to voting on the Republican tax reform package. The plan will permanently modify corporate income tax rates and modify and reduce most individual income tax rates for Americans for about seven years. Those individual income tax cuts will expire in 2025, however. The corporate income tax rate will drop from 35 percent under current law to 21 percent, the Congressional Budget Office analysis shows.

The plan will reduce national revenue by $1,649 billion as well as increase the budget deficit by $1,455 billion in the next decade, the analysis shows.

Republicans supporting the plan are pushing the impact for families and individuals who get to keep more of their paychecks. However, and even the Tax Foundation notes “the temporary nature of the majority of the individual income tax changes” in the bill. A Tax Policy Center analysis of the bill shows that higher income households receive larger tax cuts than lower income households in the legislation.

The bill includes a 20 percent tax deduction that applies to the first $315,000 of joint income earned by all businesses organized as S corporations, partnerships, LLCs and sole proprietorships, the website House Republicans created for the bill says.

Democrats largely oppose the legislation, in part because it favors businesses and corporations, not people in the long run. The bill also eliminates the individual mandate for Americans to have health insurance from the Affordable Care Act.

Here is where your House representative stands on the tax bill:

Republican Rep. Trent Kelly has been quiet on Twitter about the tax plan this week, but in November, he wrote in his newsletter that “The proposed plan would simplify the tax code, slash corporate taxes, and ease the tax burden on middle class families who have struggled to provide for their families. I will continue to review the proposal on the affects that it would have on Mississippi individuals, families, and businesses.”

Rep. Bennie Thompson, the state’s only Democratic public official, announced on Twitter that he will be voting against the bill.

“I will be voting NO on this disgusting piece of legislation that only benefits this country’s top one percent, on the backs of hard-working Mississippians and Americans,” he tweeted this afternoon.

Rep. Steven Palazzo, R-Miss., also publicly supported the November version of the House tax cut legislation, saying the bill will create “more jobs and bigger paychecks.” On Twitter today, Palazzo is pushing his support for the tax plan. “Today, Congress votes to provide relief from the outdated tax code to Americans. Under this plan a hardworking family of 4 earning a median income of $73,000 a year gets #2059more in their wallet,” he tweeted this morning.

The House is voting on this bill now, and the Senate is expected to vote on the bill this evening.