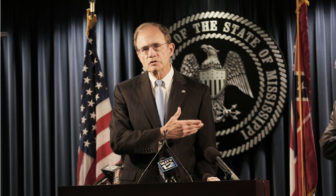 Mississippi Secretary of State Delbert Hosemann said his response to federal requests for Mississippians’ personal voter information would be: “They can go jump in the Gulf of Mexico.”

One of President Donald Trump’s campaign promises included looking into what he believed was widespread voter fraud in the 2016 presidential election (despite reports that there were fewer than 10 instances of voter fraud nationwide). After signing an executive order, Trump created the Presidential Advisory Commission on Election Integrity.

The commission made headlines today, when a June 28 letter to the Alabama Secretary of State surfaced. The letter, signed by Kris Kobach (the Kansas Secretary of State), who is the vice-chairman of the bi-partisan commission, asks secretaries of state to disclose a lot of personal information about their voters including:

Mississippi Secretary of State Delbert Hosemann released a statement saying he had not received any correspondence or letter directly from the commission, but had seen the copy of the letter addressed to another secretary.

“They can go jump in the Gulf of Mexico and Mississippi is a great State to launch from. Mississippi residents should celebrate Independence Day and our State’s right to protect the privacy of our citizens by conducting our own electoral processes,” he said in a statement.

“As you all remember, I fought in federal court to protect Mississippi voters’ rights for their privacy and won,” his release says. Mississippi joins several other states that have also publicly refused to provide their voters’ data.