There is a new and interesting twist to New Jersey’s quest to legalize sports betting. The 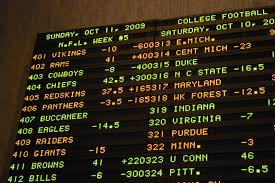 If New Jersey wins in the Supreme Court, sports betting is coming to Mississippi.

Since passing a sports-betting law in 2012, which Gov. Chris Christie signed, the state has been battling for the right to host sports betting. Christie signed more legislation to legalize sports gambling in 2014.

The state has lost in court at nearly every level, as the NCAA, NBA, MLB, NFL and NHL have blocked the law in court. But times might be changing, as the NFL is allowing the Oakland Raiders to move to Las Vegas, and the NHL is putting an expansion team in the city.

It is rare that the Supreme Court would not follow the recommendation of the Department of Justice, but that is what is happening in this case. In May, Solicitor General Jeffrey Wall wrote in an opinion that the high court should pass on the case.

Currently only Nevada is the only state that allows a full slate of sports betting, but a handful of other states also offer legal sports betting. The Supreme Court will take a long look at the Professional and Amateur Sports Protection Act, which was signed into law in 1992, that put a federal prohibition on state-sponsored sports gambling.

Nearly every state will have eyes on this case, with more $4.5 billion bet on Nevada sports books in 2016. If New Jersey wins in the Supreme Court, Mississippi and Connecticut could be the next two states to get into legal sports betting.

Connecticut has a bill on the governor’s desk that would allow sports betting. Mississippi is poised to have the state regulate that thanks to passing House Bill 967 in March 2017, which mainly deals with daily fantasy sports.

The law already allows sports betting in Mississippi, and the state could get some of the $150 billion that people illegally bet on sports each year. Our state is one of five that are supporting New Jersey in its quest to legalize sports gambling.

A congressional committee is already looking into repealing PASPA with legislation. The Supreme Court could hear the case as early as this fall, but winter is a more likely time, with a ruling coming in the spring or summer of next year.

Legal sports gambling could boost tourism to the state, as outsiders travel here to bet on the Super Bowl, NBA Finals, World Cup, NCAA national football championship and other major sporting events. The state could use revenue from taxes to help our aging infrastructure and add valuable dollars to education and other services.

If New Jersey wins, Mississippi is already at the forefront to allow sports gambling.