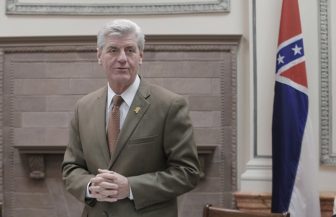 Gov. Phil Bryant tapped Mississippi Supreme Court Justice Jess Dickinson to lead the Department of Child Protection Services after former Justice David Chandler retired after a little over a year on the job.

Gov. Phil Bryant tapped Mississippi Supreme Court Justice Jess Dickinson to be the next commissioner of the Mississippi Department of Child Protection Services on Tuesday, leaving an open seat on the state’s highest court.

The appointment comes on the heels of former Justice David Chandler announcing his retirement after leading the department for a little over a year. Bryant initially tapped Chandler to lead the newly created department in December 2015.

Bryant went back to the court to find Chandler’s replacement. Mississippi Supreme Court Chief Justice Bill Waller Jr. said Dickinson would be missed on the high court in a statement.

“Presiding Justice Jess H. Dickinson is an original thinker who painstakingly researched and applied the law of each case,” Waller said in a statement. “He was tireless as a writer and exhibited great energy and enthusiasm in his work, always tempered with collegiality.”

Dickinson created the Access to Justice Commission which works on affording all Mississippians the right to justice by evaluating how state law is affecting people on the ground-level. He was also the chairman of the civil rules committee on the high court.