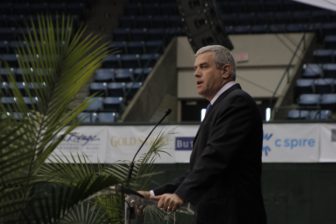 After several state officials weighed in on the white supremacist rally in Charlottesville, Virginia, over the weekend, House Speaker Philip Gunn decided to weigh in on the situation on Monday afternoon.

“Bigotry, hatred and the promotion of racial superiority, like that of white supremacists and the Ku Klux Klan, have no place in our society. I condemn, in the strongest sense possible, what occurred in Charlottesville. These are not the acts of true Americans. We should all pray for God to change the hearts of all those who believe and practice such evil.”

His second Facebook post, posted shortly thereafter, reiterated his calls to change the state flag, after the Confederate battle flag, which rests in the canton corner of the Mississippi state flag, was also seen at the rally in Charlottesville.

“Though it is not to say that everyone who flies Mississippi’s flag has feelings of hatred in their hearts, the confederate battle emblem is painful for many people. It is obvious that the confederate battle emblem continues to be associated with attitudes of bigotry, hatred and racial superiority. I believe this association will only continue to increase, therefore providing more reason to disassociate with this flag. I want to see the flag changed. But, we must acknowledge that changing our state flag, alone, is not going to solve the problem of bigotry, hatred or racial superiority. Only changes in the hearts of men are going to solve these problems. For these reasons, we should pray for God to change the hearts of all those who believe and practice such evil.”

Gunn is the only top elected Republican official to publicly denounce the state flag and call for changing it in the Legislature. Both Gov. Phil Bryant and Lt. Gov. Tate Reeves, when asked about the state flag, believe that Mississippians should be able to vote to change the flag.