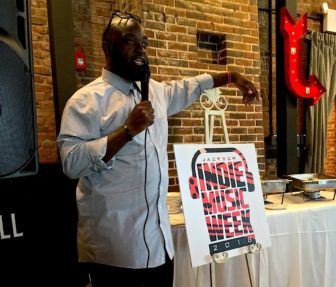 Brad “Kamikaze” Franklin, co-founder of Jackson Indie Music Week, stood in front of a small group of local musicians, influencers and media members, who were waiting for details on the festival’s upcoming third installment.

Although much about the press conference mirrored last year’s announcement, which also took place in the second-floor dining room at the Iron Horse Grill, Franklin shared a few pieces of information that suggest new territory for the festival.

For one, the 2018 JIM Week, which will run Jan. 7 through Jan. 15 around Jackson, has picked up a particularly notable sponsor, with more to be come.

After the conference, he told the Jackson Free Press that Guitar Center, one of the largest international music-store chains, will help provide sound systems for some of the non-traditional venues participating in the festival. In past years, JIM Week had to rent or borrow sound equipment for those events, Franklin said.

“This year, all of the out-of-the-way spots, unique spots, small spots where we’re going to be having stuff, Guitar Center is going to set us up with some prime sound for the entire week, some prime lights for the entire week,” he said. “So you can really look forward to the EDM party on Saturday because (Guitar Center) is going to give us lights along with what (performers) have. It’s really just juicing it up about three times.”

Nightly concerts and music showcases, as well as screenings of music videos and music-centered films, will still be major attractions, but Franklin said the planning team is also working to expand the festival’s music-industry panels.

“We really want to dive off into the logistics and the business side of music—that’s one of the things that we haven’t really been able to get into—because a big part of the independent scene is knowing how to navigate (it),” he said.

JIM Week is currently accepting submissions from musical acts, filmmakers and music-video makers. Artists based in Mississippi may submit materials for free, and those from out of state can send their entries with a $25 fee.