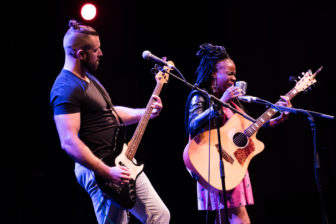 Jackson residents Ben Eichelberger and Teneia Sanders-Eichelberger won’t be the only married couple on the sold-out Cayamo music cruise in February 2018. However, fellow cruisers will certainly be able to tell them apart from the crowd—they’ll be the ones onstage.

Eichelberger says that they learned about the contest last year while working with Concerts in Your Home, an organization that provides a network of people who host house shows around the country.

“What we found out over the course of playing at several of these venues was that a lot of the homeowners who host these concerts go on this cruise called Cayamo,” he says. “They were like, ‘You guys would be perfect for it.’ … We were like, ‘Well, we’ll throw our hat in the ring.”

Sanders-Eichelberger says they were one of about 300 initial submissions before judges selected them as one of the 10 semifinalists. Then, after an online voting round, Heart Society, formerly known as Teneia, became one of three acts to earn a spot on the lineup, along with North Carolina singer-songwriter Caleb Caudle and Florida alternative-folk duo Flagship Romance.

The trio of up-and-coming acts will join established artists such as Lee Ann Womack, Drew and Ellie Holcomb, John Prine, Brandi Carlile and Patty Griffin, to name a few. Over the course of the cruise, Heart Society will perform on three separate occasions, and Sanders-Eichelberger says that they are currently developing their sets with that in mind.

“It’s just about keeping it fresh and making each set (unique) because I think there will be some in smaller rooms and at least one on a bigger stage,” she says. “It’s insane what they do on these cruises. So I think we’ll be creating a set that’s really intimate, creating one that’s upbeat and then creating one that’s a big kind of show.”

Heart Society’s Soundcheck win comes just as the band is launching an Indiegogo crowd-funding campaign for its upcoming EP, “Wake the Queens.” Their goal is set at $20,000, and 10 percent of all contributions go to Equality Now, a women’s rights organization that works to combat global issues such as sex trafficking, sexual assault and discrimination.