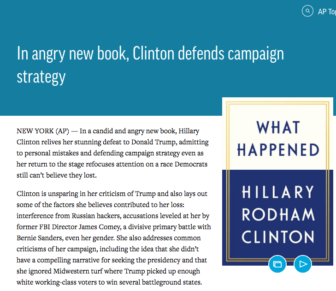 The AP published a story today calling Hillary Clinton’s new book “angry”—and later in the piece referred to her as a “has-been.” They soon changed the “angry” references.

“In a candid and angry new book, Hillary Clinton relives her stunning defeat to Donald Trump, admitting to personal mistakes and defending campaign strategy even as her return to the stage refocuses attention on a race Democrats still can’t believe they lost,” AP writers Jonathan Lemire and Bill Barrow wrote.

In case you don’t know, “angry” is used to belittle women’s ideas, opinions and even justifiable outrage. As in, “she is just an angry woman,” you know.

The next few paragraphs were fine: nothing special but nothing that made my eyes pop out. Then I came to this one: “In Wisconsin, Democratic pollster Paul Maslin called it a ‘bitter irony’ that Clinton is now trying to reach voters—or consumers—in states he believes her campaign mostly ignored. But he said it’s ultimately a side show from a has-been.”

I saw the “bitter irony” part first and cringed at the use of “bitter” after calling a woman “angry” a couple times already. But at least the reporters were quoting a different man using that phrase. Yes, they could have just said that he said it was “ironic” and skipped the “bitter” trigger word so often used for women, but it was more forgivable.

But then I saw the following sentence. “But he said it’s ultimately a side show from a has-been.”

The AP said that a Clinton critic called her new book “ultimately a side show from a has-been”—but did not quote him saying those particular words. Did he?

Huh? What’s important here, journalistically, is that this was not a direct quote from a critical source. They were paraphrasing him. If he said that the woman who got more votes for president from most men in history was running a “side show” and then called her a “has-been,” then quote him. If he didn’t, these gentlemen are using some mighty offensive trigger words to refer to the Democratic nominee for president in their AP article. I simply do not hear men called a “has-been” very often, and I’m quite sure I’ve heard no one call Bernie Sanders that name even though he didn’t get nearly as far as Clinton in the race. If they do, journalists should quote them saying it.

By that point, I had been calling out the cringe-worthy trigger words for Clinton to our newsroom, which is a mix of men and women.  We discuss issues like implicit bias, structural racism and sexism, and similar issues openly around here. When I read “side show from a has-been,” one of our male editors nearly came out of his chair in disbelief. He is a wonderful editor and person, and could not believe they chose such a phrase. He would not have allowed it to go forward, and neither would I—and we’re both natives of Mississippi, not exactly the kindest state toward women.

I then deleted the article off the Jackson Free Press website. I then read further down and found this one: “But Clinton, who has a reputation for avoiding blame for her failures, said she takes ‘responsibility for all’ of her campaign’s mistakes.” (Emphasis added.)

Wait, they’re just slipping in the blanket idea that Clinton has a “reputation for avoiding blame for her failures”? They really don’t have anybody in their database to quote saying that? Come on. By this point, the tone is blatant.

This story, to put it mildly, was a victim of the implicit bias that creeps into too many newsrooms in a country where women run far too few of them, or at least have a strong voice in them. Like racial implicit bias, at least it’s implicit, which means that the disrespectful diminution of a powerful woman into insulting and belittling descriptions might not have been purposeful and spiteful—and just sounded like it was. The irony, of course, is that just this kind of treatment helped create a false equivalency last year that helped result in Donald Trump as president. And I’d posit that it is not the best example of AP journalism out there.

After deleting the article, I went to Twitter to see if it was out there. One of the writers of the piece, Jonathan Lemire, had tweeted the story with the “angry” headline front and center. I retweeted him and called it out for being “hideous story filled w sexist trigger language abt Clinton: ‘angry,’ ‘bitter irony’ instead of ‘ironic,’ + ‘a side show from a has-been.'” I also said “This is the problem with many white male journalists/editors and implicit bias. This piece could be written without sexist triggers. Easily.”

The AP story states as fact that Clinton has a “reputation” for not taking blame rather than quoting a source saying it.

Soon, my web editor called out to me to look at the story on the AP site again.  The “angry” was gone from the headline, he said with delight. It now reads: “Clinton book relives Democrats’ agonizing defeat.” And the lede now says, “In a candid and pointed new book, Hillary Clinton relives her stunning defeat to Donald Trump….” The photo caption, however, still contained the “angry” label.

But, alas, Clinton is still a “has-been” running a “side-show” further down in that offensive paraphrase. No one ever said that progress for women doesn’t come in drips and drabs, folks.

Oh, and I’m still not running it. I’m a huge fan of the local Associated Press reporting team—who helps extend our coverage and frees up our team to focus on enterprising work—but I’m having no part of this triggered story.

It kind of makes me angry, in fact.