Andy Taggart is a Mississippi Republican who is stepping his toe into the racial-healing waters.

Andy Taggart has been on the Mississippi political scene for a long time, perhaps most prominently as the chief of staff for former Mississippi Gov. Kirk Fordice, a Republican who was, shall we say, Trumpian in his own garish ways.

For one thing, Fordice was an unapologetic, public apologist for the pro-Confederate, wink-wink racism crowd that his party has bowed before since Dixiecrats defected to the Republican Party after northern Dems supported civil rights legislation in the 1960s. Fordice was one of the Mississippi politicians outed in the 1990s for speaking to the Council of Conservative Citizens, for instance. That group grew out of the mailing lists of the white Citizens Council that started in Mississippi in the 1950s, and is blatantly racist. So racist, in fact, that Dylann Roof wrote in a “manifesto” found in his home that the organization inspired him. Later, of course, Roof massacred multiple worshipers in a Charleston, S.C., black church in 2015 after they invited him in—an event so heinous that it led the state of South Carolina to stop its official embrace of the Confederate flag.

Fordice also called out Democratic gubernatorial opponent Dick Molpus at the Neshoba  County Fair in 1989 for daring to apologize to the families of James Chaney, Andrew Goodman and Michael Schwerner, who were killed by local Klansmen and buried near the fairground. As secretary of state, Neshoba County native Molpus had apologized to the families of the three civil rights workers on the 25th anniversary of their deaths. Fordice belittled him in a gubernatorial debate at the fair, which is overwhelmingly white, dotted with rebel flags and considered red meat for barely disguised racist screeds from politicians there. I should know: I grew up there. When we played Dixie in the Neshoba Central band at the fair, old white men would stand at attention, their hands trembling over their hearts.

“I don’t believe we need to keep running this state by ‘Mississippi Burning’ and apologizing for 30 years ago,” Fordice barked at Molpus at the fairground, where the Dem’s own family owns one of the early cabins and hosts lunch for media and what is usually Democratic politicians looking outnumbered two days during the fair each year.

Many analysts believe that Fordice’s attack on Molpus for apologizing for those deaths cost him the election.

As for his talk to the CofCC? No apologies. There were good people in that group, he told the Associated Press. It wasn’t a time when white Republicans, or enough white Democrats, apologized for pandering to racist sentiments for votes.

Fast forward 28 years, though, and the Mississippi flag is there, and the state’s politicians still pander to the Confederate crowd for votes. Gov. Phil Bryant is a prime example with his quiet proclamation of Confederate Heritage Month even as more politicians than usual were trying to change the state flag in early 2016 in the light of Roof’s rampage. Lt. Gov. Tate Reeves is almost as blatant, even employing the “outsider” rhetoric that was so popular in the 1960s when racists justified violence against “outside agitators” who “came to Mississippi looking for trouble.” House Speak Philip Gunn has seemed like the only Republican hope with his tentative statements that the state flag needs to change. 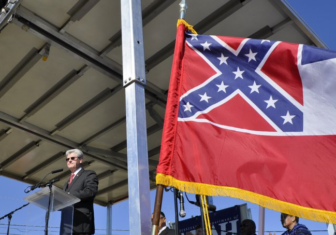 Gov. Phil Bryant speaks at the ground-breaking for the Mississippi Civil Right Museum. Myrlie Evers-Williams, the widow of Medgar Evers, sits under the flag.

Last weekend, though, another compelling Republican voice jumped out there in favor of changing the flag. Taggart, Fordice’s chief of staff, tweeted out a long letter (posted in DropBox of all things) to lay out a plan for changing the Mississippi flag. I retweeted it immediately Sunday knowing it was a big deal from him.

“[T]he simple fact is that the flag itself is highly polarizing, when the whole purpose of a state flag is to provide a symbol of unity, around which all our state’s citizens should be proud to rally,” Taggart wrote in the letter. “Arguments that Confederate monuments and the like will be the next to fall if we change the flag don’t wash. The state flag is different from monuments, street names, portraits, headstones and the like, because the state flag is supposed to be a symbol of all Mississippians’ civic identity. Sadly, we just cannot say that it is today.”

Taggart laid out a specific strategy for Mississippi  Republicans to lead on charging the flag, arguing that “leadership” is not “simply taking people where they want to go, or even ‘letting the people vote’ on hard issues.” He added, “Sometimes, leadership requires encouraging and urging people to go where they should, even when they don’t particularly want to go there.”

In the letter, and later in media throughout the week (including in a video statement on WLBT), Taggart called on Republicans to author and file bills this fall to strike the Confederate battle emblem from the flag by statute in the spring session.

This was a remarkable sea change from the indoctrination that too many Mississippians accept as a matter of course, and an overdue example of prominent Republicans stepping out in front of this issue to simply do the right thing. Sure, Taggart threw his base some bones in the letter. After saying that he was not going to get into a “historical overview of the the flag,” he played with history a bit, saying, “Mississippi Republicans had no part in the state-sanctioned slavery of the 19th century of the state-sponsored Jim Crow laws of the 20th century.” This is true only because Republicans of those eras had not yet invited southern Dixiecrats to turn their party into a race-baiting political machine, which even a former GOP chairman apologized for several years back, even though it changed little. “Southern strategy” history needs to be reckoned with and taught as precaution, as it made a Trump and the so-called “alt-right” possible, but Taggart’s efforts are important here and now.

Yesterday, I was looking at the racist letter Texas A&M football coach Kevin Sumlin received; his wife, Charlene Sumlin, had tweeted it. The handwritten letter was as old-school racist and threatening as you can get: “You suck as a coach! You’re a n*gger and you can’t win. Please get lost! Or else.”

And right there under Ms. Sumlin’s tweet was Andy Taggart tweeting back to her: “Ma’am, I don’t know your husband, and I don’t like A&M. But I have been impressed every time I have ever seen him interviewed. Blessings.” It wasn’t a direct response to the racism, but it was outreach, and a beginning.

True racial healing requires truth-telling, courage, love and compassion—all of which can lead to a very needed transformation in our state and America. Now a long way from the arrogant Kirk Fordice days, Andy Taggart is sticking his toes into this hallowed water, and I truly hope many more will follow.