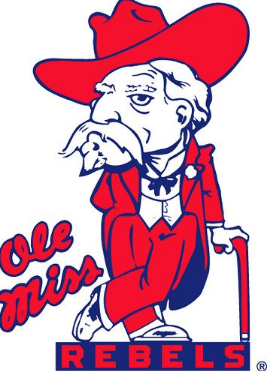 Many Ole Miss students and alum have moved on from the old days of Colonel Reb as their disturbing mascot. And the Rebel Black Bear may soon be history, too.

The University of Mississippi’s student-body president, Dion Kevin III, today announced that students will vote on whether to change its Rebel Black Bear mascot to the popular Landshark, The Daily Mississippian, the university’s school newspaper, reported this morning.

Students will vote on the mascot change next Tuesday alongside “personality” elections for Mr. and Miss Ole Miss, Homecoming Queen, maids and campus favorites. The university chose the Black Bear in 2010 in homage to famed Oxford writer William Faulkner, who wrote the famous short story, “The Bear.”

The Rebel Black Bear has been the official mascot since 2010 when Ole Miss officially chose it to replace the old racist symbol of Colonel Reb, which still makes various unofficial appearances during campus events and, as the JFP staff noted with surprise once, dancing at weddings of Ole Miss graduates. Haley Barbour also had a Colonel Reb on his wedding cake back in the day; his campaign sent out the photo of the Ole Miss graduate and his wife, Marsha, cutting the cake during his successful campaign for governor of Mississippi.

Many Colonel Reb supporters, however, would still rather the old plantation owner to be the official mascot of Ole Miss, but that seems unlikely to ever happen with a newer generation of Ole Miss students rejecting the racist symbols of the old days.

The ship now seems to be sailing toward the landshark, at least if the student-body president gets his way. Kevin issued a statement in favor of the landshark, which The Daily Mississippian published in full. It reads in part:

“The Landshark as we know it today has its origins in football, but has since expanded to symbolize Ole Miss’s fight spirit and athletic prowess. It was started by Ole Miss defensive linebacker and military veteran Tony Fein in 2008 during our historic upset of the Tim Tebow-led Florida Gators. With 41 seconds left in the game, Tim Tebow ran an option left, identical to a scoring play earlier in the quarter. As the play developed, Fein rose up, hand to helmet, and the Landshark was born. It would subsequently join the Rebels in wins such as the 2009 Cotton Bowl victory, the 2013 SEC Basketball Tournament, and the 2014 College World Series. After a decade of success under the Landsark, it’s time to make it a lasting part of our history. … I support the Landshark, and I am an Ole Miss Rebel.”

Put simply, the students of Ole Miss seem to be focused on the future and making their own mascot choices, not on symbols of the past from Confederate colonels to literary figures. Cheers to them.

UPDATE: After this post went live, someone pointed out to me this great piece by Adria Walker, formerly of the JFP, at Millsaps College about Confederate symbolism on that campus, including the Majors mascot. Definitely worth a read.