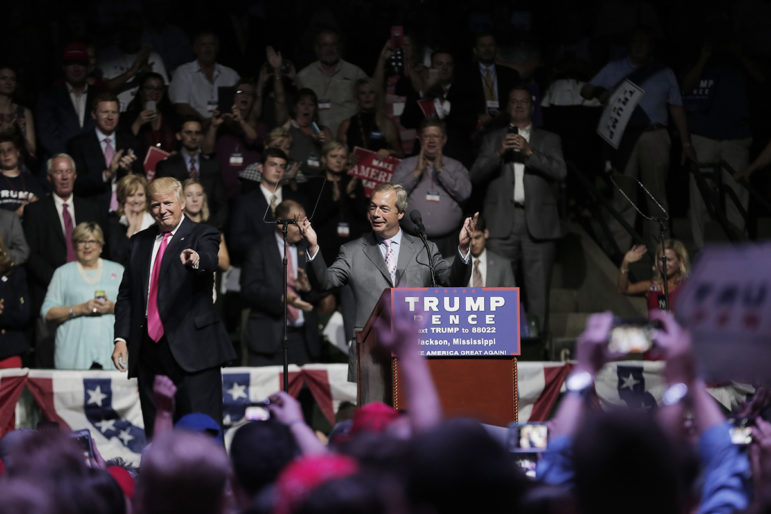 Nigel Farage on-stage at the Mississippi Coliseum in August 2016 for a Trump campaign rally.

A year ago, Nigel Farage, a well-known Brexit-believer and former leader of the UK Independence Party in the United Kingdom, graced the stage for then presidential candidate Donald Trump’s rally in Jackson, Miss.

Farage shared the stage with Trump, encouraging Mississippians to beat back the “Establishment” in the 2016 presidential election. Gov. Phil Bryant also graced that stage in August 2016, and after Trump won the election, Bryant found himself in good company with the Brexit boys again. Bryant reportedly invited Farage to the inauguration in D.C., where he introduced him to a room full of partygoers:

Bryant’s connection to the United Kingdom did not stop in D.C. apparently, and on Sept. 18, the governor announced that the Royal Commonwealth Society will open its first U.S. branch in none other than the state of Mississippi.

“Britain and our state already have strong economic, military and cultural connections, and I look forward to strengthening those bonds by serving as chairman of the new branch’s board of governance,” Bryant wrote in a Facebook post.

The society, which counts the queen as a patron the Telegraph reports, is a group of 53 countries around the world. A spokesman for the society told the Telegraph that the Mississippi branch of the society will strengthen the relationship between the United Kingdom and the U.S.

Correction: A previous version of this post confused the Royal Commonwealth Society with another organization called the Commonwealth. We apologize for the error.