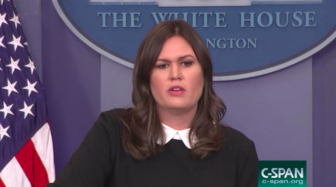 Sarah Huckabee Sanders confirmed that President Donald Trump will come to Jackson, Miss., for the opening of the 2 Museums on Saturday. Photo Courtesy C-SPAN.

On Tuesday, Dec. 5, White House Press Secretary Sarah Huckabee Sanders confirmed that President Donald Trump “will participate” in the grand openings of the Museum of Mississippi History and the Mississippi Civil Rights Museum on Saturday, Dec. 9.

White House correspondent April Ryan asked Sanders for a response to the boycotts and likely protests planned for Saturday in response to the news of Trump’s possible attendance. The transcript of their exchange (via C-SPAN) is below:

April Ryan: There are comments from the NAACP, (and) from black ministers that are planning on protesting and boycotting the President’s visit to the (Mississippi) Civil Rights Museum. What say you?

Sarah Sanders: I think that would be honestly very sad. I think this is something that should bring the country together to celebrate the opening of this museum, and highlighting Civil Rights Movement and the progress that we’ve made. And I would hope that those individuals would join in that celebration instead of protesting it. However, they have every right to protest it.

April Ryan: (Is it) an insult that he’s coming as we’ve had issues with Charlottesville, the back and forth, when the president couldn’t get his statement straight on Charlottesville?

Sarah Sanders: I think he got his statement very clear when he condemned all forms of racism, bigotry and violence. There’s no grey area there, and I think he made it very clear what his position is.