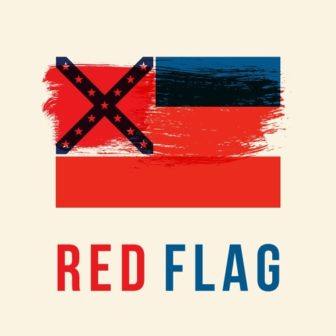 On Friday, Dec. 8, Podastery co-owner and host of podcasts such as “Let’s Talk Jackson” Beau York announced a new podcast that would explore the meaning of the Mississippi state flag and its impact on the state’s citizens. Here is a press release, verbatim:

“Red Flag,” a new podcast about the historical impact and fallout from the state flag of Mississippi, was announced on Dec. 8. The podcast, hosted and produced by citizens of the state, aims to show how Mississippi is changing from within, specifically highlighting how the Confederate emblem was obtained, those who wish to see it removed and why, through the narration of hosts Beau York and Chellese Hall.

“While the current flag represents the state’s history, it also represents a heritage that very few people are proud of. To better honor the state’s history and the people who are here now, Mississippians deserve to have a flag,” said Hall, a Chicago-native but Mississippi-transplant. “Our job as Mississippians, however we got here, is to tell our own story of the good, the bad and the tragic. We can only do that by uniting from our individual, colorful backgrounds to present ourselves as one to the world and wave our honor high.”

Told in a style that’s best described as “This American Life” meets “Pod Save America,” “Red Flag” storytelling is at the forefront of the production which utilizes musicians, artists and writers native to the southern state. “We won’t deny that our team is passionate about changing the flag,” York said. “But because of the approach we’re taking—it’s about history and facts. If the podcast is done well, if we tell the truth and do so in a way that resonates with people, it can set a unifying path to change. From Mississippi, by Mississippi, within.”

York said that podcasting can be a disarming way to talk about things that are painful for some and impact many.

“I’ve seen it before with other projects that I’ve done,” he said. “You can talk about something that’s very polarizing, that people are passionate about—and when you allow people to think out loud and process emotion in a raw way, it evokes reaction. The way that our flag is right now should evoke reaction. I want to utilize the power of podcasting—the way it’s able to connect, to build relationships and change hearts and minds—as a means to an end of the Flag.”

Listeners can sign up at redflagpod.com to gain early access to the inaugural episode of “Red Flag,” “Welcome to Mississippi.” The full season of episodes will release in early 2018.