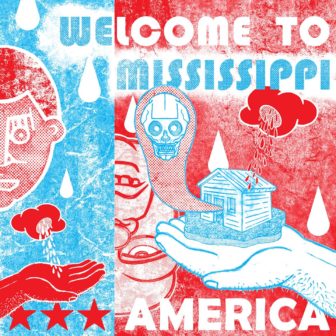 A lot of things happened immediately after Donald Trump won the Electoral College vote to become the 45th United States president in 2016. For Garrad Lee and Cody Cox, it was a conversation.

On the night of the election, Lee posted on social media, saying something along the lines of, “Now America gets to be Mississippi for the next eight years,” commenting on the idea that Mississippi was one backward place in an otherwise progressive nation.

The next day, he and Cox, who co-own indie record labels Homework Town Records and Elegant Trainwreck, began discussing a new release that would do more with that sentiment while also showcasing voices that speak to the issues facing the state and the country.

“We talked forever ago about doing some sort of compilation, probably four or five years ago,” Cox says, “and we were like, ‘Right now is a good time. The proverbial iron is hot, and we need to strike. If we’re going to do a compilation showing what Jackson or even the state has to offer, now is a good time.'”

A tumultuous year into Trump’s presidency later, Cox and Lee are preparing to release “Welcome to Mississippi, America,” a limited-run vinyl compilation featuring a variety of entertainers and artists from Jackson and other parts of the state.

While music compilations are a common occurrence, finding one on vinyl is less common. As for the reason behind the choice to press “Welcome to Mississippi” on vinyl, Cox says it came down to permanence for him and Lee, even if it meant more effort on their part.

Whereas with streaming, digital downloads and other physical formats like CDs, many people find it easier to buy and throw to the side, people don’t typically do that with records. It is not unlike the political issues that the inspired the record, Cox says.

“There have been times in the past where it’s easy to just say, ‘Eh, well, it’s not that bad,’ and you kind of shelve things,” he says. “… Right now, this is such an intersectional, almost catastrophic level of things. You can’t get away from it. It’s everywhere.”

While Cox says they did not tell the artists the songs needed to be political in nature, they made sure that anyone participating to the compilation knew its purpose. That allowed for a greater diversity in the types of music on the record.

For instance, he says, Clouds & Crayons and hip-hop artist Skipp Coon contributed politically charged songs, whereas the songs from And The Echo and Passing Parade are more abstract and are somewhat up for interpretation.

“There are a lot of (political) songs on there, but there also some just really solid songs,” he says. “Like, there’s an Argiflex song that’s instrumental, and it’s definitely a driving, angular song. It’s kind of how we jump the record off—with something that’s very upbeat and aggressive at the same time.”

All profits from the compilation will go toward Planned Parenthood Southeast and the Mississippi NAACP, and Cox says that he hopes the project will spur others in the Mississippi music scene to take the concept beyond this one release.

“We had talked about, ‘Maybe this will spur other people,'” Cox says. “Maybe End of All Music will do their own in Oxford, or maybe T’Bones (Records & Cafe) will get a bunch (of artists together) in Hattiesburg. Maybe we’ll do crossover stuff, and maybe this could be the thing that jumps all that.”

He and Lee will be hosting a free release party for the record at 7 p.m. on Saturday, Feb. 17, at The Flamingo (3011 N. State St.). The event will feature performances from three of the artists on the compilation—R&B-fusion duo Clouds & Crayons, Cox’s three-piece garage-rock band Passing Parade, and R&B artist Sika—as well as several surprise guests. Party-goers can pick up a copy of vinyl for $25 or pre-order at elegant-trainwreck.com.

For more information, find the “Welcome to Mississippi, America” release party on Facebook.