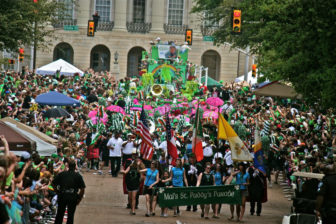 On Wednesday, Aug. 29, Hal’s St. Paddy’s Parade organizers announced a few changes to the 2019 parade, including a date change and the return of the Sweet Potato Queens. Here is a press release, verbatim.

The parade, one of the nation’s largest and more unusual St Patrick’s Day celebrations, is planned for Saturday, March 23, in downtown Jackson—a week later than it traditionally occurs.

“By moving it back a week, we expect to attract more families and out of town visitors to the downtown Jackson area, as there will not be a conflict with spring break, as in past years,” said parade founder Malcolm White, “and we hope the date change will enable several marching bands from across the state to join the parade line-up.”

“I’m honored to be included—not just because Malcolm is a friend, but because what the parade does for Mississippi and Batson Children’s Hospital,” said St. John, while adding “we are all going to have a blast.”

Children’s health care at the University of Mississippi Medical Center has been the beneficiary of the parade since the event’s beginning in 1982.

“With what we have planned, the bands, the date change, and the return of the Sweet Potato Queens,” said White, “we are excited about the positive impact it will have in supporting the state’s only hospital for children.”

Jen Hospodor, director of Children’s Miracle Network Hospitals and community-based fundraising at UMMC, agrees saying “This festival represents the best of the state’s arts and entertainment and we are thankful for their continued support of Children’s of Mississippi and Batson Children’s Hospital.”

Children’s of Mississippi, the umbrella organization for all University of Mississippi Medical Center pediatric care, is growing, with a new seven-story children’s tower now under construction by Batson.

An outpatient specialty clinic for children is also part of the building plans, as are a new lobby, conference center and parking garage. The Children’s Heart Center, representing the Medical Center’s pediatric cardiology program, will also call the tower home.

The parade, held perennially for the past 35 years, was named Mal’s St. Paddy’s Parade until 2016, when the name was changed to honor the memory of White’s brother, restaurateur Hal White. Hal White died at 64 after suffering an aneurysm in 2013.

More information will be available online in January 2019 at halsstpaddysparade.com.