A new poll released by Millsaps College and Chism Strategies shows that Mississippians are less optimistic about the future of the state and the direction Mississippi is headed. 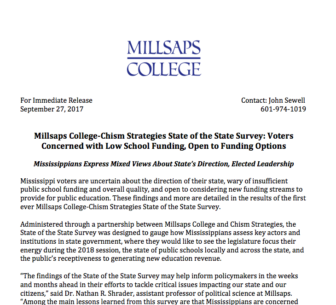 Millsaps College and Chism Strategies released a State of the State poll on Sept. 27, 2017.

Forty percent of the over 500 Mississippians polled believe the state is on the wrong track, while a little more than 36 percent believe Mississippi is headed in the right direction.

Mississippians also gave approval ratings of three top lawmakers in the state: Gov. Phil Bryant, Lt. Gov. Tate Reeves and Attorney General Jim Hood. Reeves has some work to do, the poll shows. Thirty-eight percent of Mississippians polled approve of Reeves, while his likely competitor for the gubernational election in 2019 Hood has an approval rate of 52 percent.