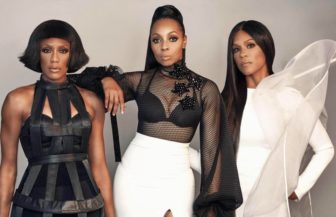 R&B trio En Vogue is one of the many acts performing at the 2018 Mississippi State Fair, taking place Oct. 3-14.

There are a few sounds that attendees can always expect from the Mississippi State Fair—the braying of barn animals, kids screaming in delight, the whirring of rides, and of course, the sounds of a star-studded music lineup.

On Tuesday, July 17, the Mississippi State Fair Commission announced the headlining artists for the 159th annual fair, which will take place Oct. 3-14.

Country singer Chris Janson will be leading off the entertainment schedule on Wednesday, Oct. 3. The Missouri native is known for hit songs such as as “Buy Me a Boat” and “Fix a Drink.”

On Thursday, Oct. 4, the Budweiser Pavilion will feature multi-platinum hard-rock act Hinder, which released its sixth studio album, “The Reign,” in August 2017. Current lead vocalist Marshal Dutton, who joined the band after Austin John Winkler left in 2013, co-produced the record.

R&B trio En Vogue performs at the state fair on Monday, Oct. 8, performing hits such as “My Lovin’ (You’re Never Gonna Get It)” and “Free Your Mind,” along with a few songs fans may not be as familiar with. The group, which formed in Oakland, Calif., in 1989, released “Electric Cafe,” its first album in more than a decade, in April of this year.

The Marshall Tucker Band will be returning to Jackson on Tuesday, Oct. 9. The southern-rock group has been performing since 1972 and recently had its song “Can’t You See” featured in the Academy Award-winning 2017 film “I, Tonya.” Starting in late September, the band will hit the road as support for Lynyrd Skynyrd’s farewell tour.

Country-rap star Colt Ford will take the stage Wednesday, Oct. 10, fresh off his “Ride Through the Country” tour, which runs July through early September. The two-month, 25-city headlining run celebrates the 10th anniversary of his titular breakthrough album, as well as the release of a new deluxe edition.

Finally, MercyMe will close out the fair’s entertainment schedule on Thursday, Oct. 11, switching things up in a number of ways. For one, the triple-platinum contemporary Christian group will be moving the action over to the Mississippi Coliseum, with tickets ranging from $25 to $281. The Texas-native band is currently on its “Imagine Nation” tour, celebrating the resurgence of its successful 2001 single “I Can Only Imagine” thanks to this year’s sleeper-hit film of the same name.

Other than the Mississippi Coliseum concert, all events are included with fair admission prices. For more information, visit the Mississippi State Fair Commission’s website.